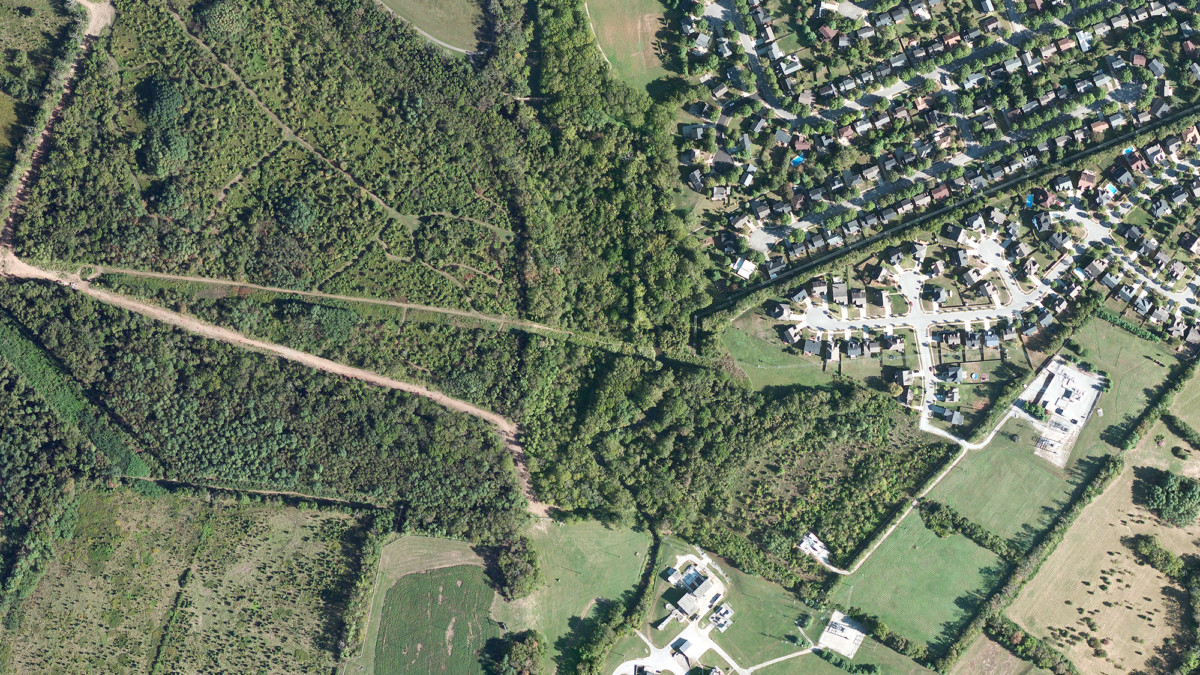 With nearly 3 million miles of pipeline throughout the United States, threats to infrastructure come in many forms. While natural threats such as erosion, corrosion exposure, and vegetation represent a tremendous obstacle for pipeline operators, anthropogenic (human caused) changes often represent some of the pipeline operator’s most critical threats.

Pipelines often route through heavily populated “High Consequence Areas” where the risk of new structures, construction, heavy machinery, digging, and other human activity all pose a real threat to pipeline infrastructure. Any one of these may result in pipeline damage or leaks that affect public health, contaminate the environment, and may cause the company to incur regulatory consequences and lost revenue. Anthropogenic changes often represent some of the pipeline operators most critical risks.

Responding proactively to threats mitigates any potential risk and protects the long-term integrity of the pipeline.

With increasing scrutiny from both the general public and regulatory agencies, pipeline operators are more motivated than ever to seek out, track, and catalog the multitude of encroaching human activities along their thousands of miles of pipeline. Responding proactively to threats mitigates any potential risk and protects the long-term integrity of the pipeline.

Documenting the multitude of structures, construction sites, land changes, heavy machinery, and other anthropogenic changes along many miles of pipeline is a daunting task. Often requiring multiple employees to manually comb over terabytes of satellite data, looking for changes and potential threats is an expensive, labor intensive, and error prone process.

Satelytics uses the power of the cloud, algorithms, and autonomous software to turn tedium into a simple, repeatable process. Satelytics is able to monitor an ongoing stream of satellite data covering thousands of miles of pipeline and synthesize that massive data down into clear area to focus your attention. What used to take our clients armies of people and many months can now be done by a few people in just a few days.

Here’s how it works: Satelytics builds a base set of data to categorize the various concern areas near or within the pipeline right-of-way including natural items (water crossings, vegetation), and anthropogenic item (structures, roads, construction, vehicles). When new data is gathered over the length of pipeline, Satelytics compares the two sets of data using our proprietary algorithms to isolate and categorize changes.

Isolated changes are documented in maps and charts on the Satelytics portal, or sent to any third-party software via our API (Application Programming Interface) that allows for automated passing of data between software applications. Alerts can also be sent to mobile devices allowing up-to-the-minute data for field crews.

Below are overlaid changes detected by Satelytics. While Satelytics can detect both natural changes as well as anthropogenic changes, the following imagery details human sources only. 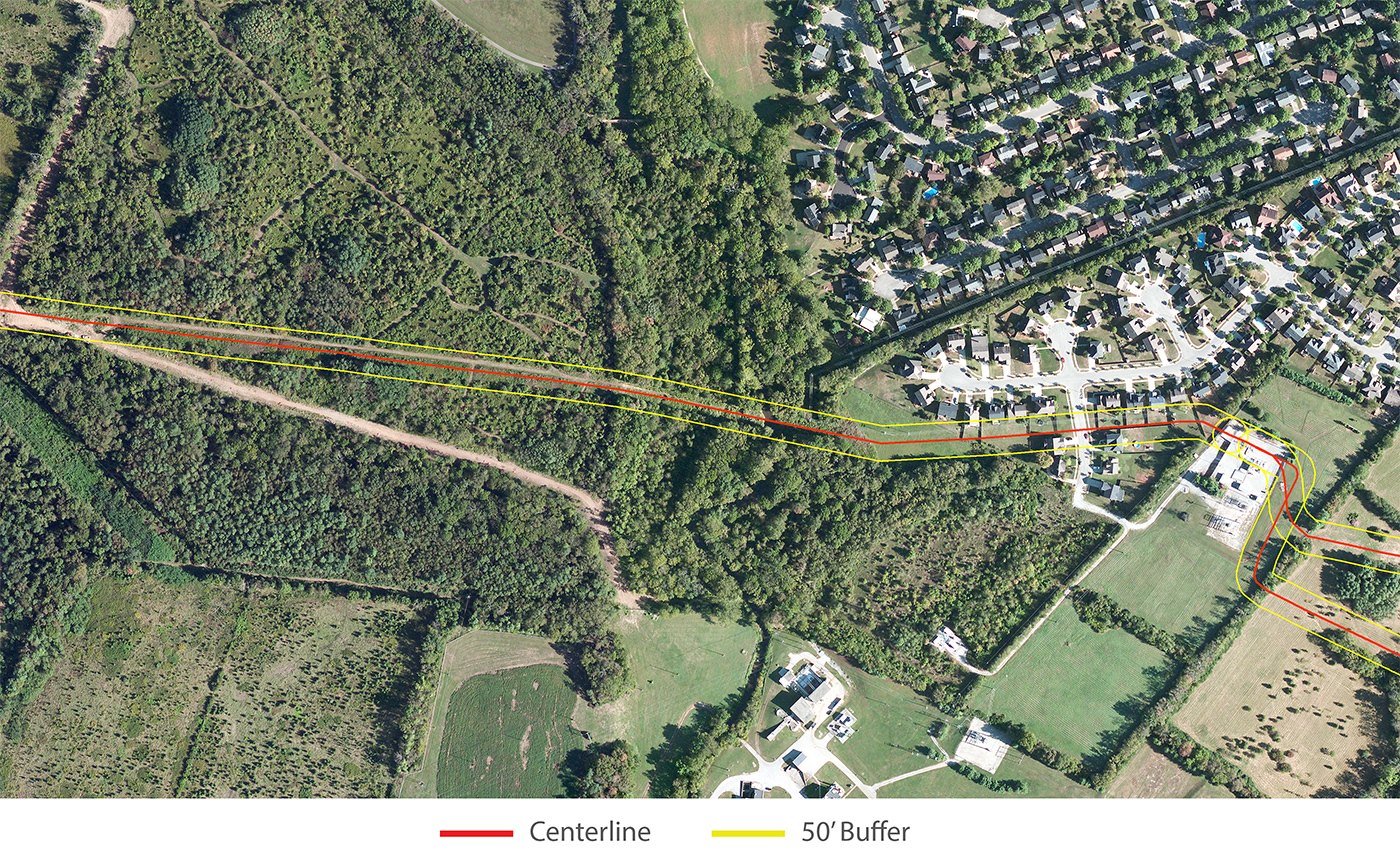 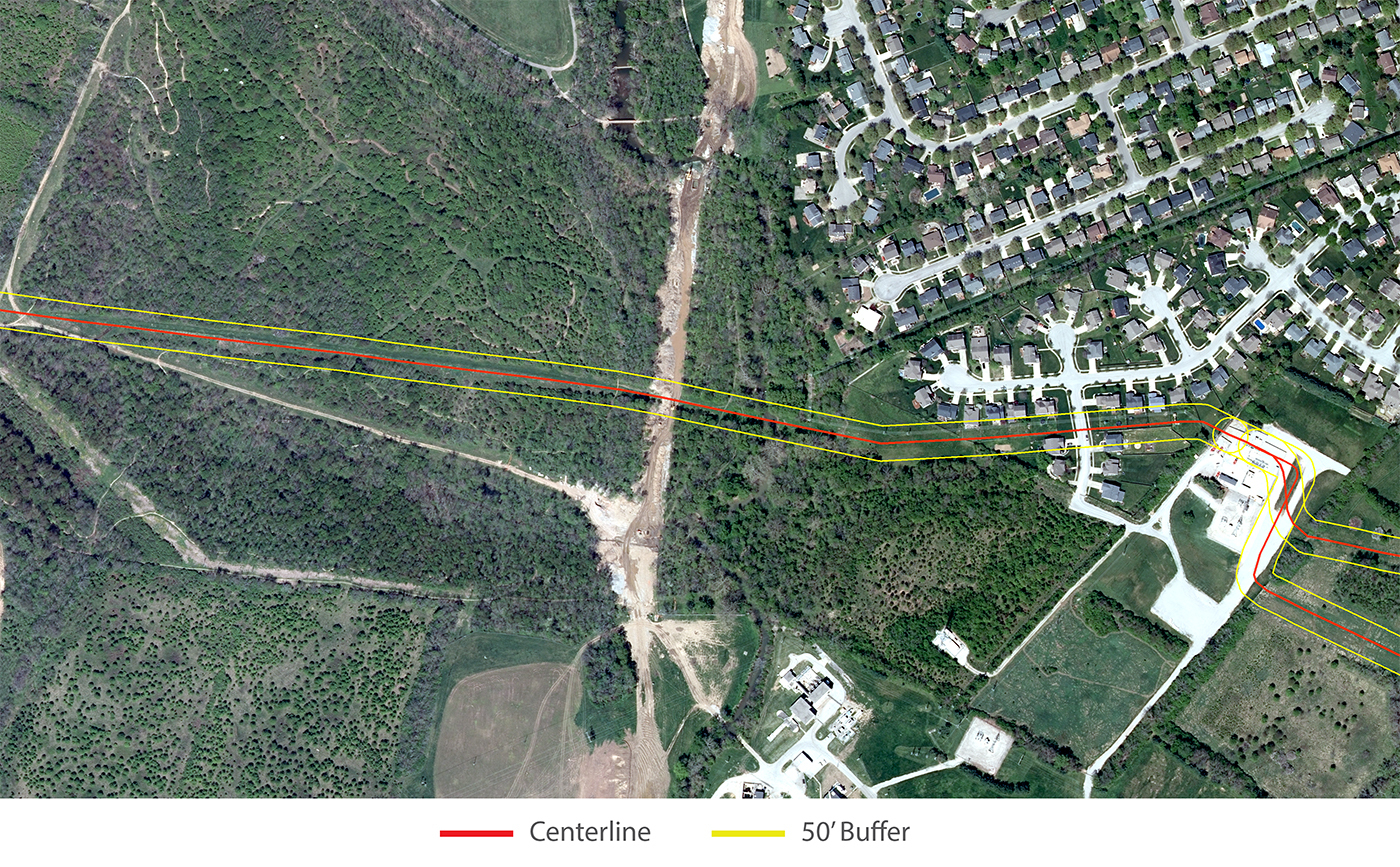 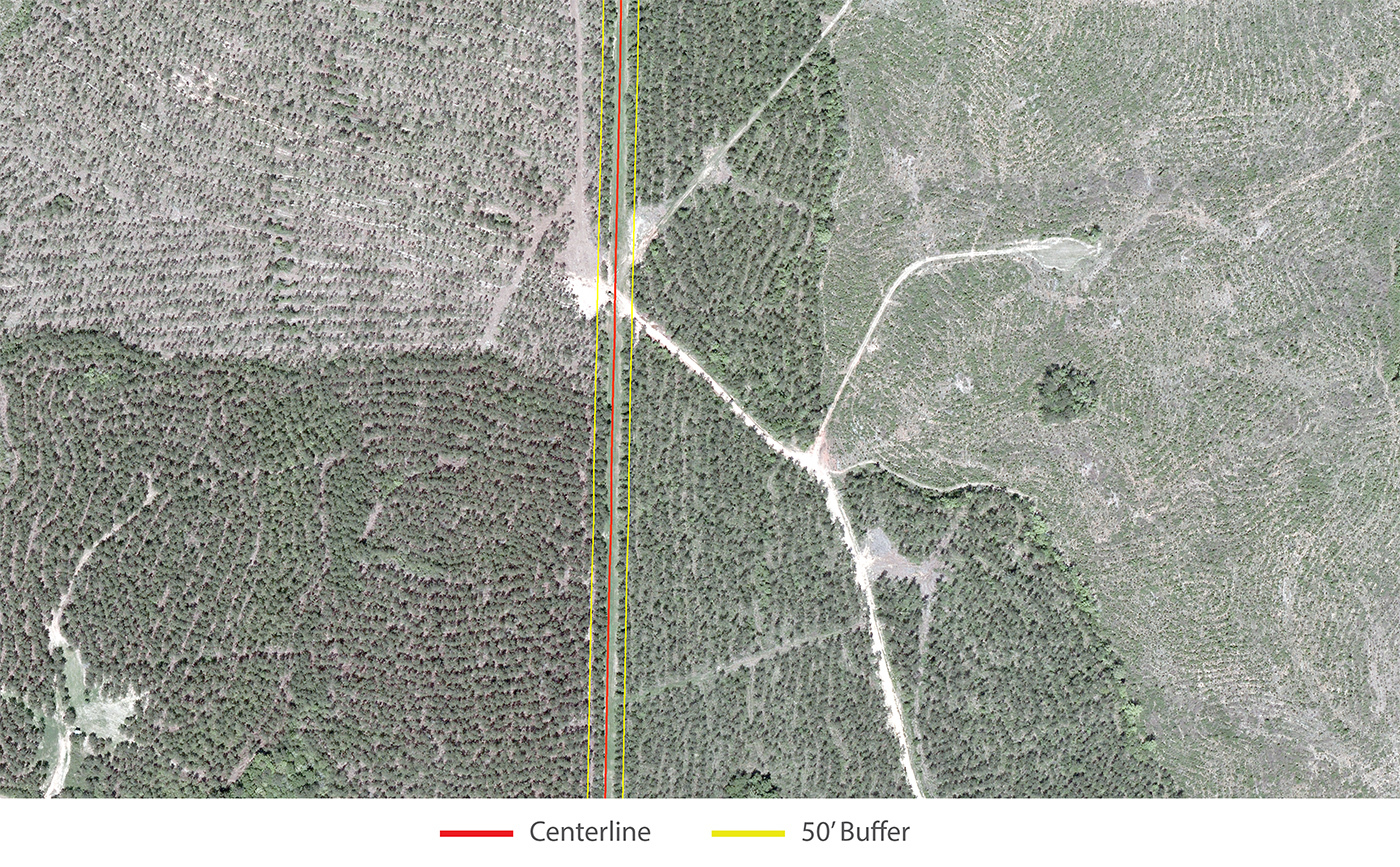 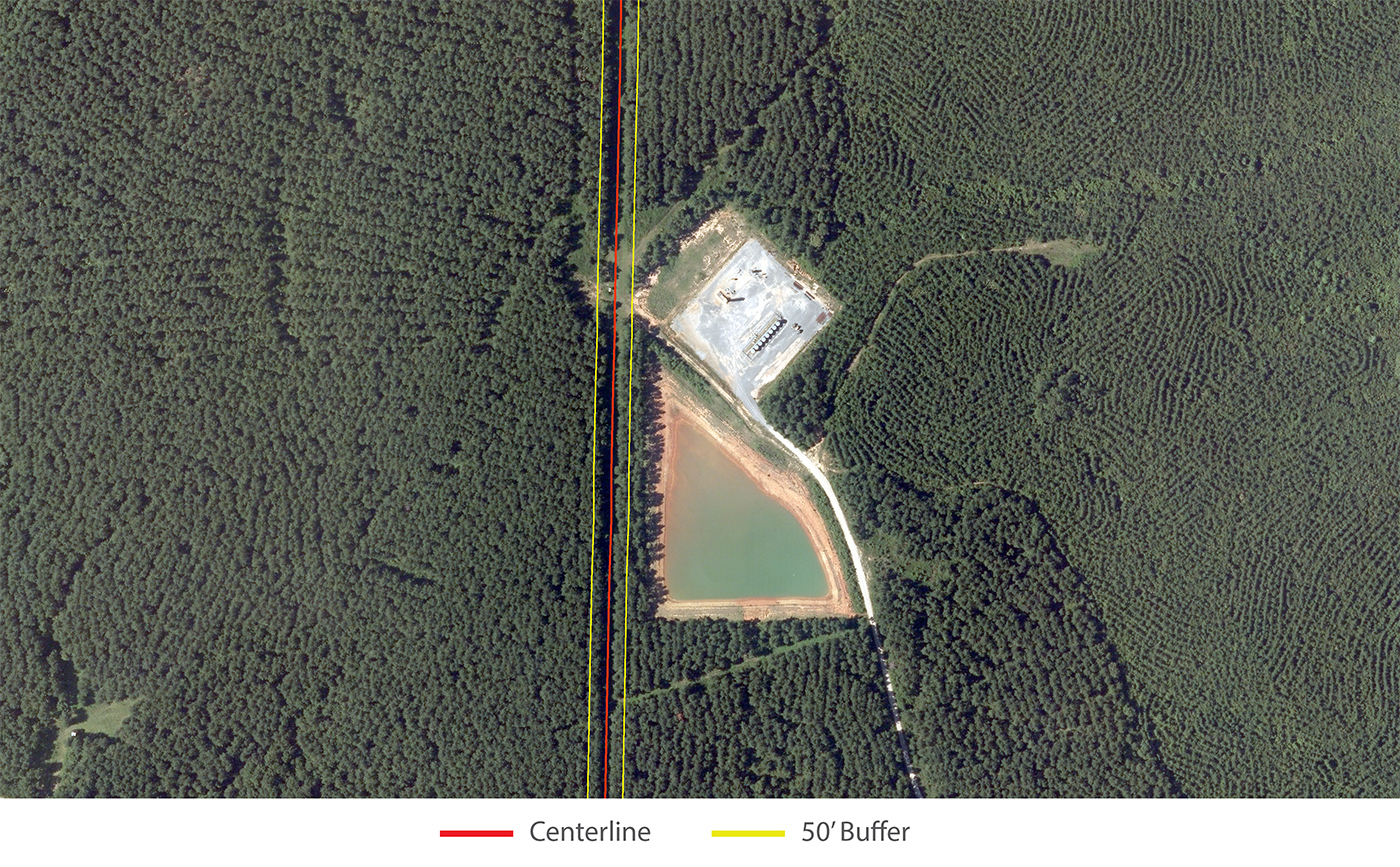 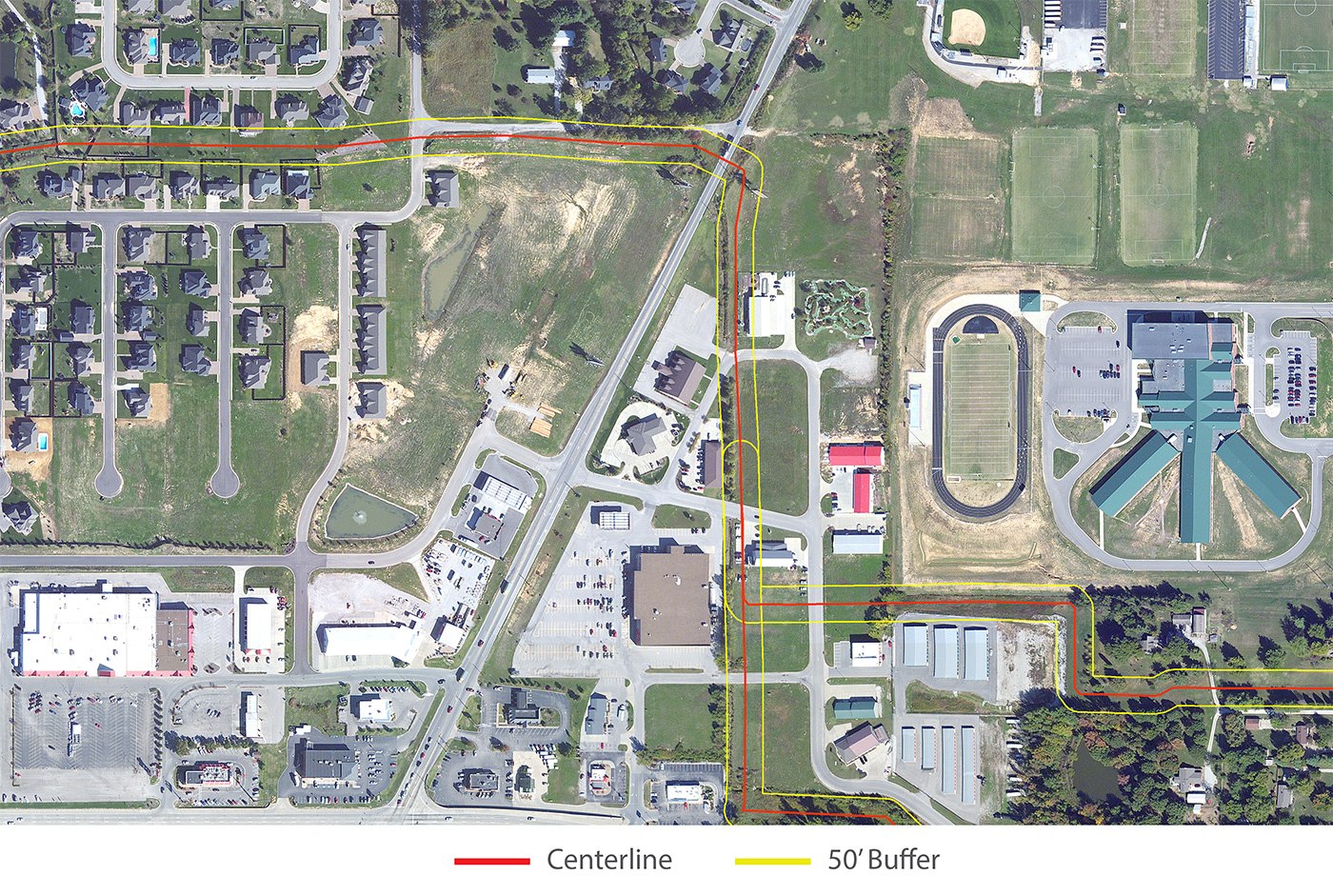 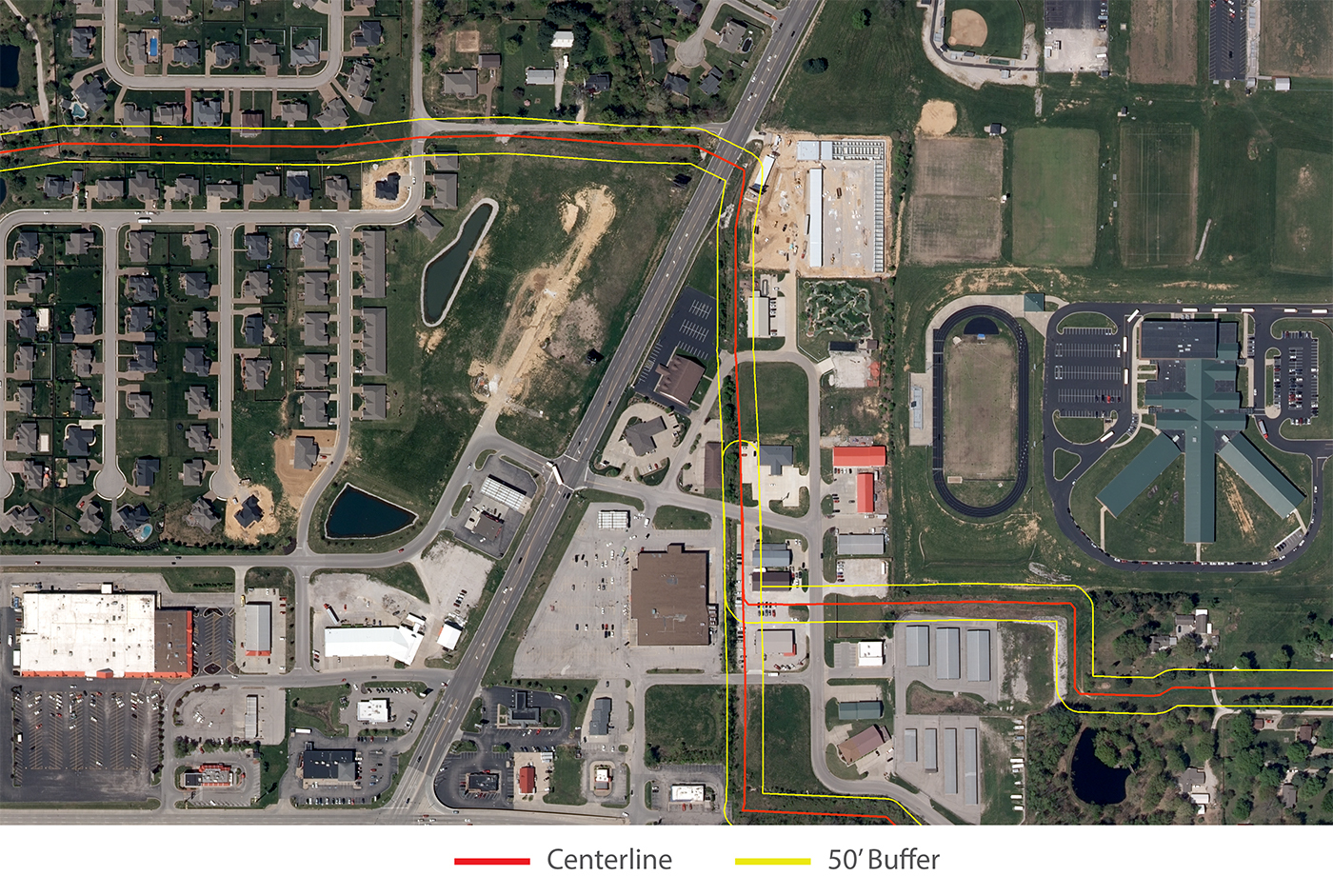 Multiple construction sites, new buildings, and parking lots within the pipeline buffer or directly over centerline. 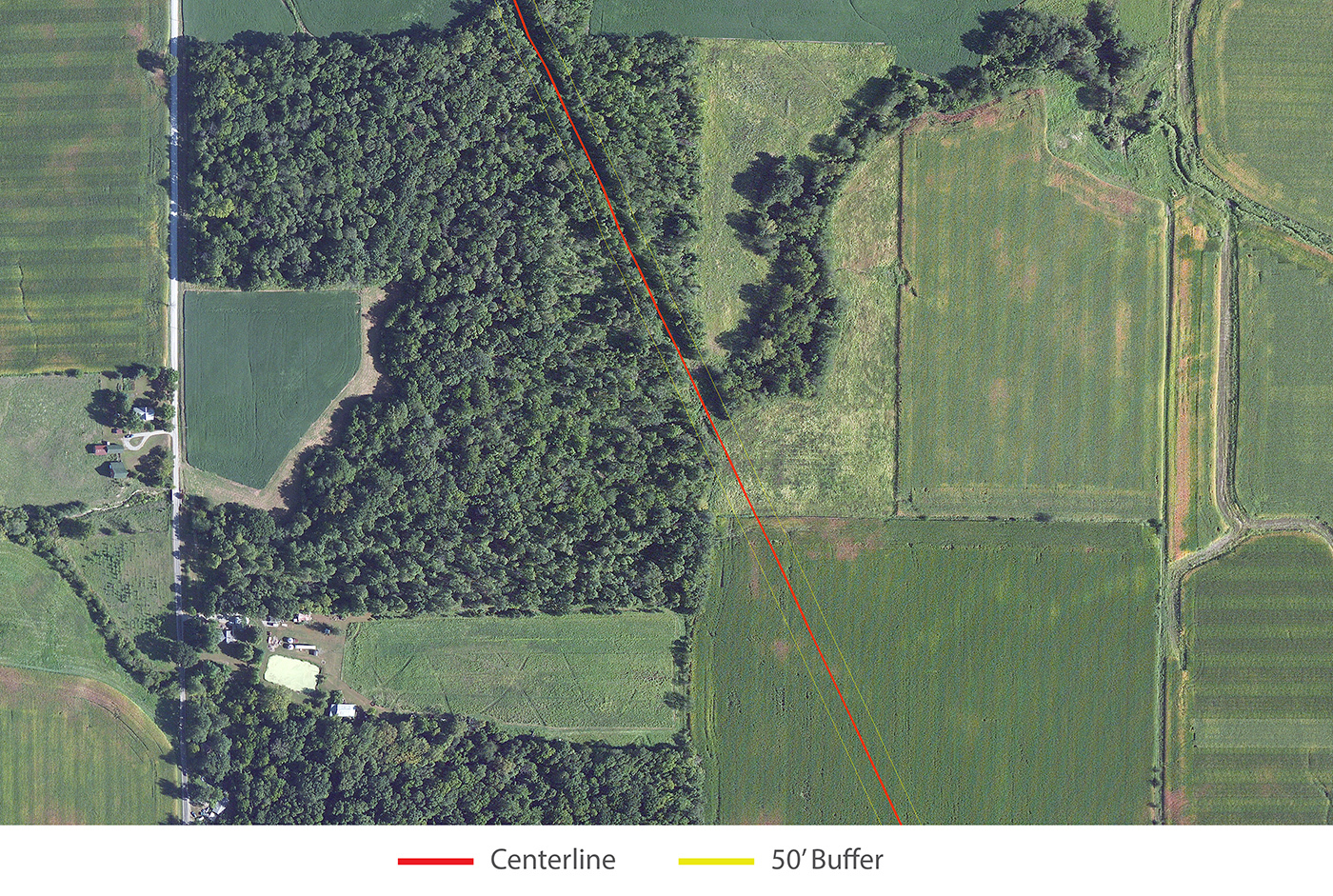 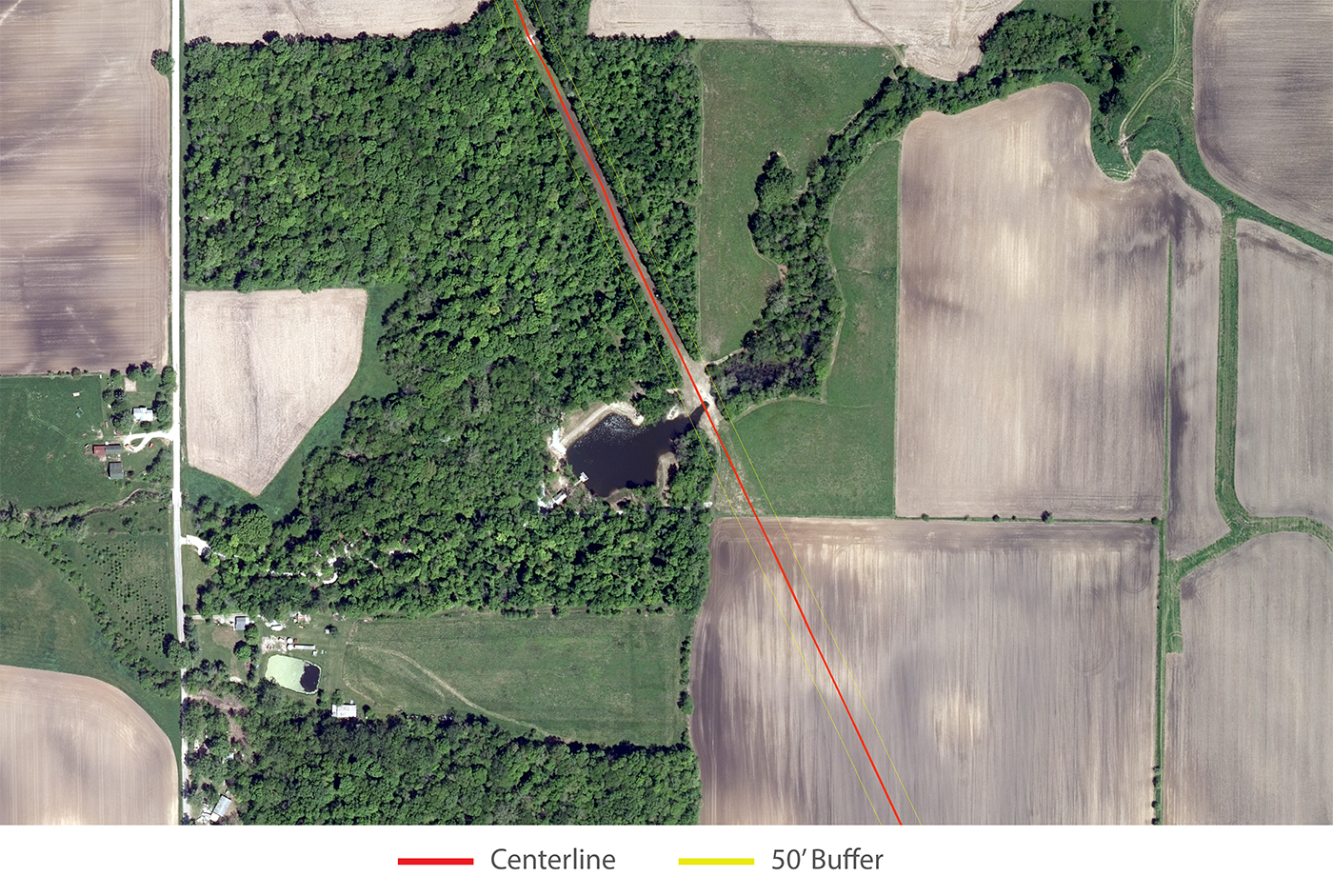 A man-made pond cross over the pipeline centerline. 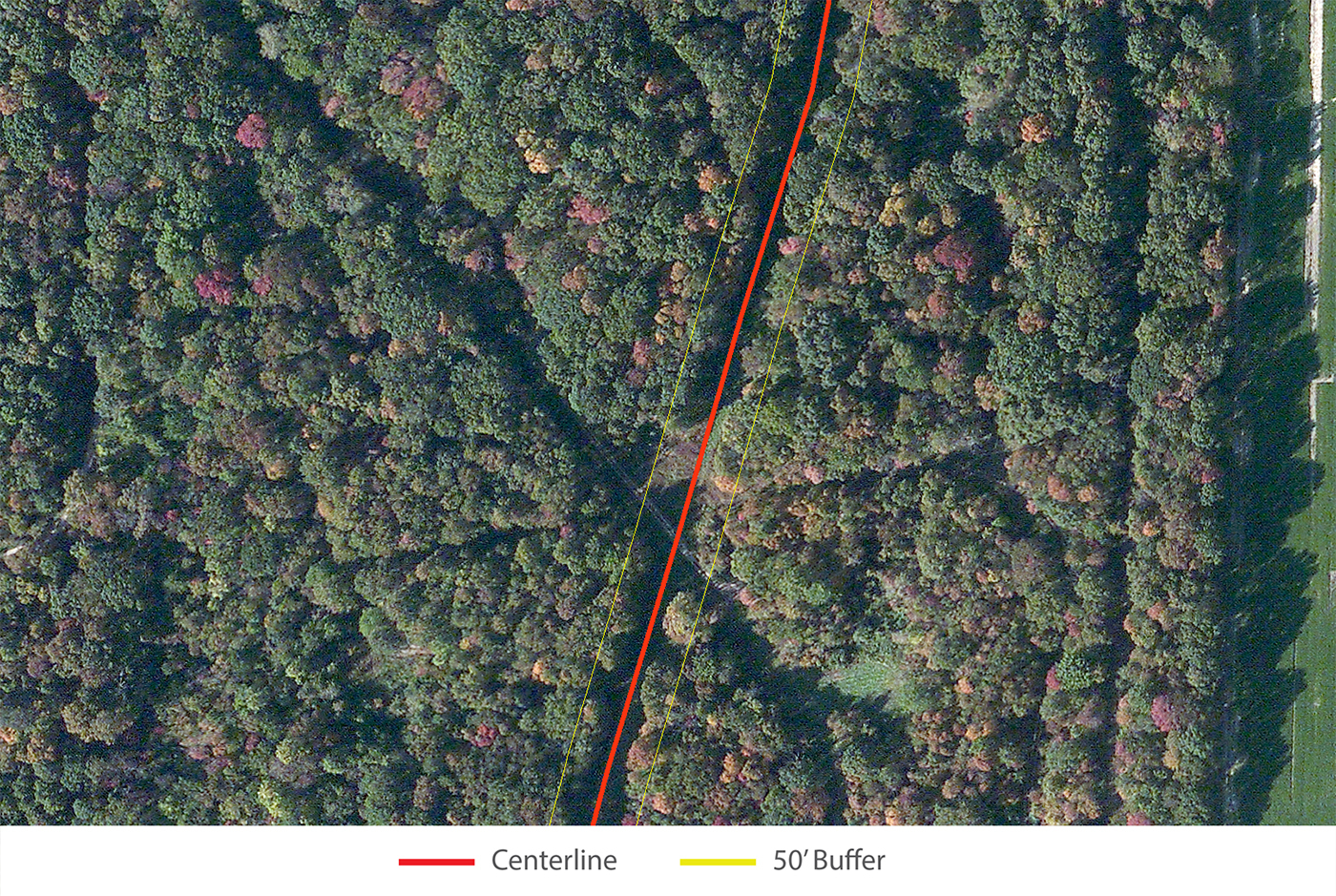 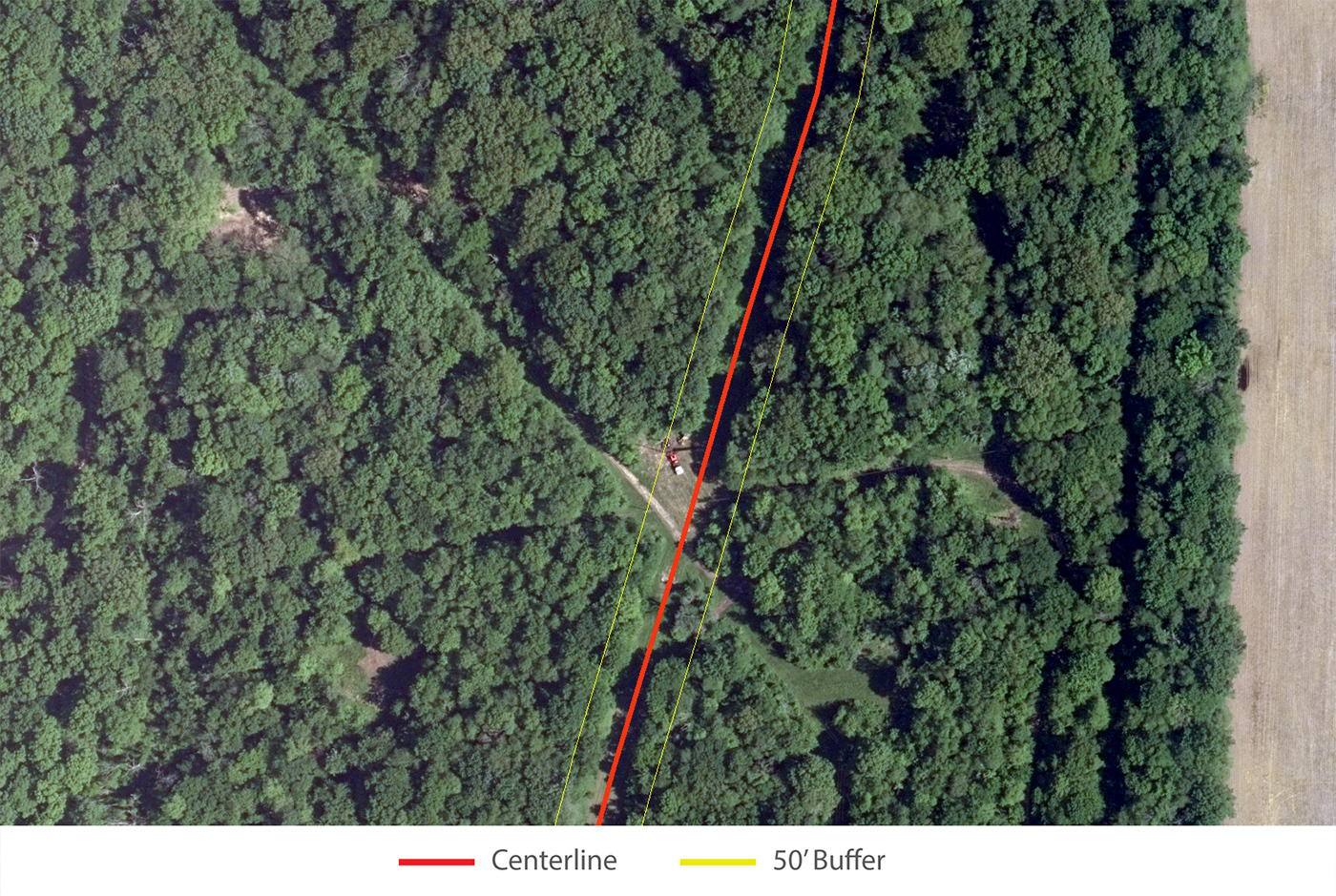 Heavy machinery appears in a clearing within pipeline buffer. 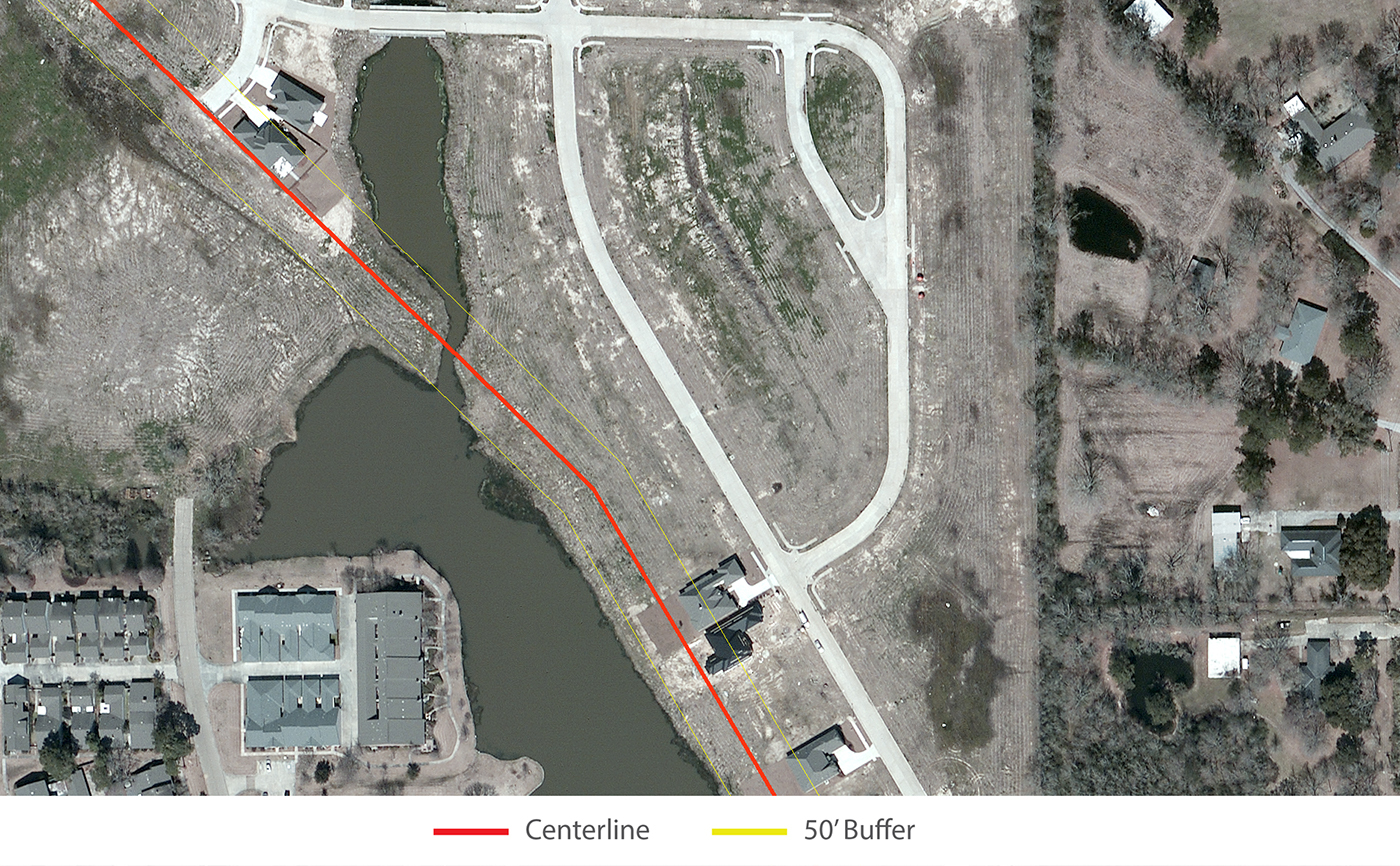 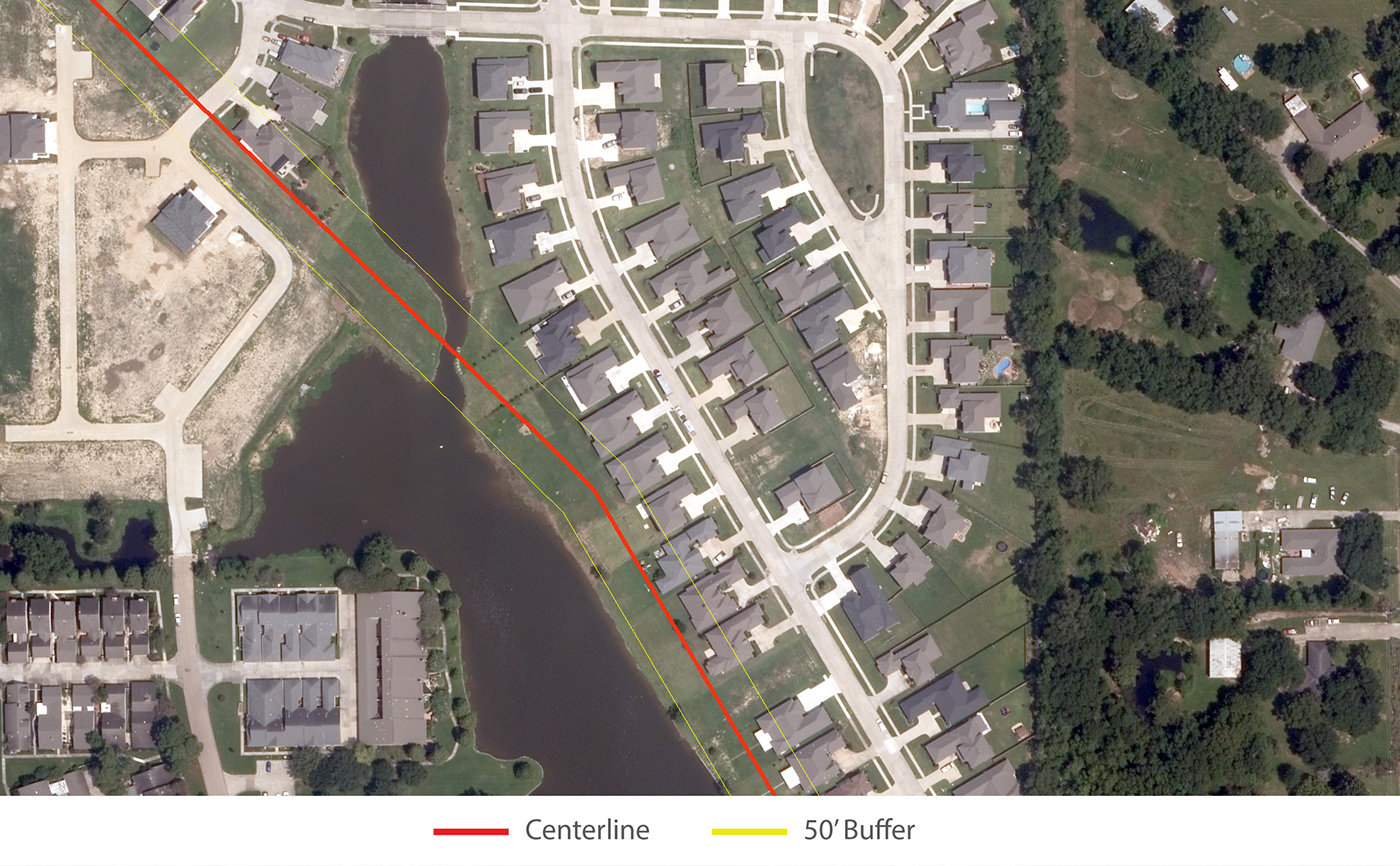 A new pool, along with several new houses, are built within the pipeline right-of-way. 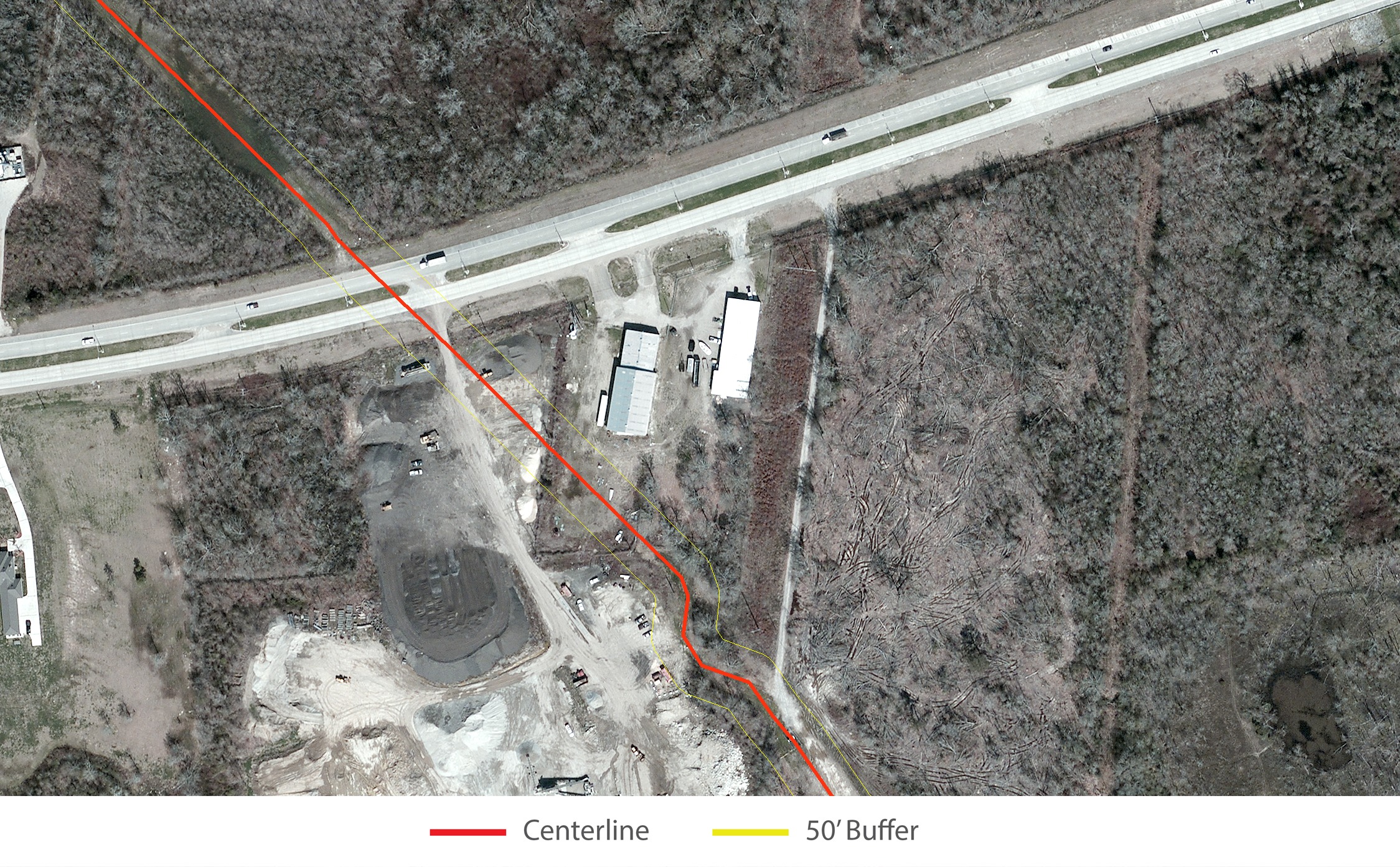 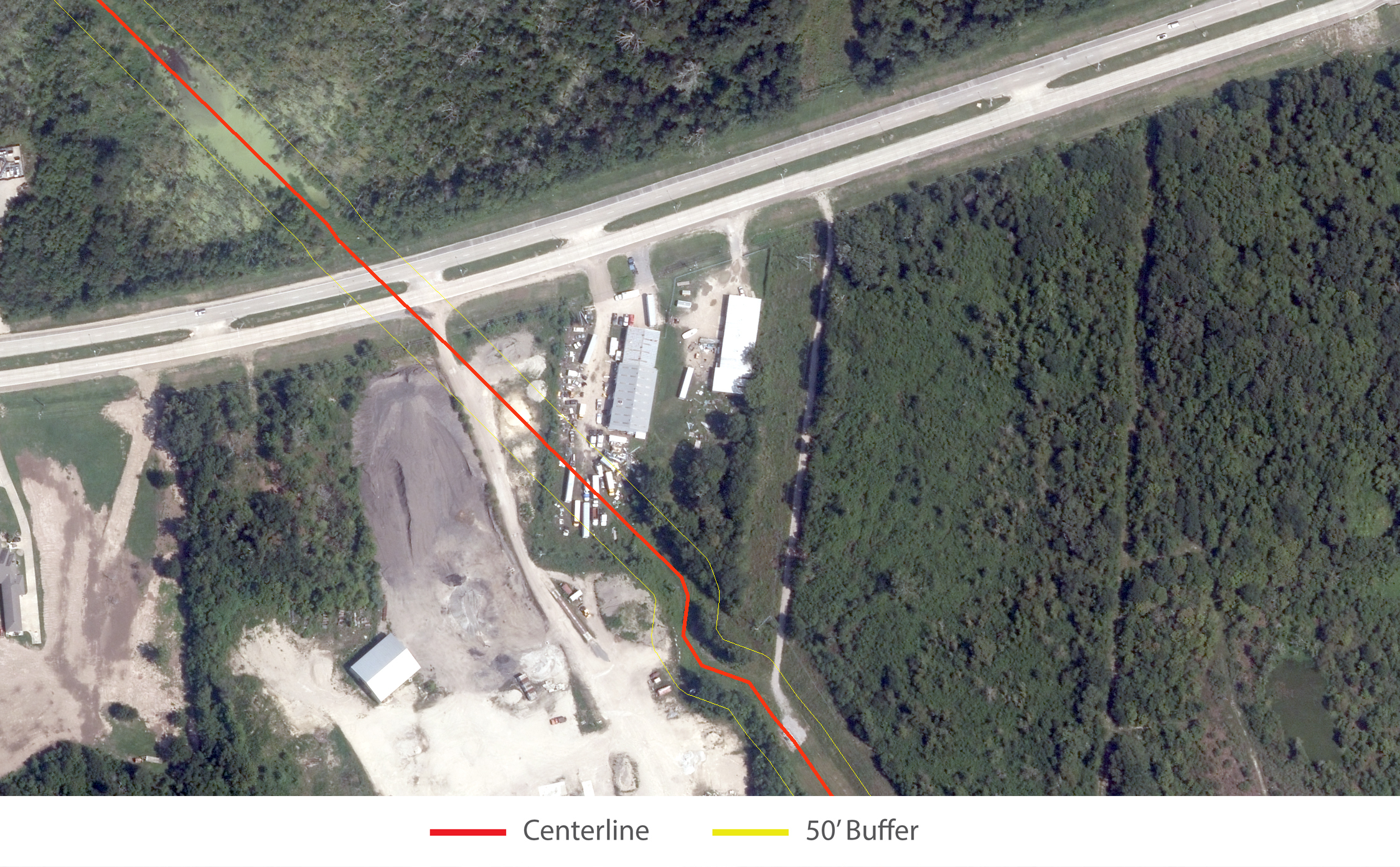 Satelytics has the amazing ability to distill terabytes of satellite data into action; these are only just a few examples of the many thousands of objects, structures, bodies of water, and other manmade changes we’ve uncovered for our clients. Satelytics is not only a faster and more cost-effective method of assessing right-of-ways, it’s also vastly more accurate than human analysis alone; this mitigates long term risks, helps operators to more effectively direct their spending, and reduces exposure to consequences.

With the advent of nano-satellites and satellite constellations, more frequent revisit times will enable even more effective monitoring of pipeline and other oil & gas infrastructure. Processing this tremendous amount of data will only become more critical.